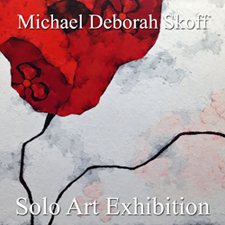 Light Space & Time Online Art Gallery is very pleased to announce that Michael Deborah Skoff has been selected as one of the four artists of the gallery’s fourth “Solo Art Series” Art Competition.  Michael will now have a month long solo art exhibition and she will be featured on the gallery’s front page, in the Gallery’s YouTube Channel, as well as in the “Solo Art Series” archive.

Michael Deborah Skoff lives in Canada, where she is an award-winning artist.  Michael will be promoted by the gallery with an extensive public relations campaign, as well through the gallery’s broad social media network.  In addition, she will be featured on the gallery’s YouTube channel, with an event catalogue and with an event postcard.

Below is Michael’s Artist Biography, her Artist Statement, along with 15 of her paintings.  We hope that you will take the time to read Michael’s information and to take a look at her positive imagery.

Michael’s work centers on bringing forth positive and constructive forces to negate the onslaught of violent, vulgar and negative energy in the world today. She believes society needs to return to the realm of the spirit to diminish the ego and heal the planet. Her works offer a moment to pause, inhale and resurface.

Michael is inspired and fascinated by ancient and medieval times. Her love of broken Egyptian tablets and monuments, crumbling Roman and Greek columns and statuary, Byzantine gold-leafed altar pieces and illuminated manuscripts has directly influenced her work and led her to develop her own style.

Using multiple layers of thick oil paint applied solely with a palette knife, Michael massages each element of her subject until it feels snug and safe and firmly embedded in the canvas without fear of coming loose. Her final coat selectively covers up most of the prior layer using a reductive-style process resulting in a cracked and broken-concrete appearance in her work.

Michael completed both a Drawing Certificate and a Painting Certificate at George Brown College in Toronto, Canada. She then spent a few years exploring art on her own before leaping out into the art world in the spring of 2015.

She has since participated in twenty-seven group shows, sixteen of which were juried, including the 2016 National Open Juried Exhibition at the Society of Canadian Artists. She is the recipient of three Honourable Mention Awards, two Juror’s Choice Awards, one Award of Merit, one First Place Oil Award and one Special Merit Award.

In May 2016 Michael became an elected member of the Colour and Form Society and she is also a member of several art groups.

Aside from her signature style of painting, Michael also continues her studies of high-realism painting, stained glass and metal work.

Daily I am driven to paint by a deep need to participate in beauty.

I engage in my own quiet battle against negative, destructive, violent and vulgar forces with deceptively delicate and gentle artworks that offer a moment to balance and a space to wander.

Using multiple layers of thick oil paint applied solely with a palette knife, I create a cracked and broken-concrete appearance in my work directly inspired by my love of ancient and medieval times. I crave not only these aesthetics but also the lost wisdom, mystery and respect for the spirit-realm that these times embody.

We each carry a glistening spirit-gem forgotten and buried inside us beneath the cumulative dust and rubble of centuries. We have built and glorified the ego and the material into a colossus and lost touch with our spirit.

My interest is to reacquaint us with these spirit-gems – represented as flowers, animals or goddesses – and my works center on the moment the gems are unearthed and set free to purify, bedeck and heal Mother Earth.