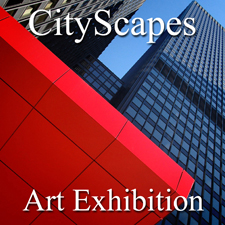 Our art competition for March was “CityScapes” whereby artists where asked to interpret and depict cities, towns, urban scenes and any related metropolitan subjects for the art competition theme. The submission process and competition for the artists began in the middle of February 2012 and concluded on March 29, 2012. We received 581 entries from 165 artists, from 17 different countries from around the world, including the Australia, Austria, Canada, China, France, Germany, Hungary, India, Iran, Italy, Netherlands, Oman, Russia, Slovenia, Switzerland, Turkey and the United Kingdom. In addition, we received entries from 29 different states.

Due to the volume and the quality of the entries received this month we also included 120 artists who were chosen for Special Recognition. The artists in this group could have easily been included in the upper tier of our winners, as their art was exceptional. In addition, most of the artists who were not chosen could have easily received Special Recognition awards, as their art was also outstanding. We hope that you will take the time to also enjoy their beautiful art work too. To view their work click on the thumbnail image and that will take you to a Slide Show. In order to leave the Slide Show at any time, just click on the large image in order to escape.

We want to thank everyone for participating in this art competition. Just because your art was not selected is not a reflection on your artistic talents and skill. It takes a lot of courage and nerve to enter and expose yourself to this type of competition and you should be applauded for your efforts. Please do not give up entering online and “Bricks and Mortar” art competitions and calls for art, as your art could have easily been chosen here too.

All winners will now be featured on the Light Space & Time website for the month of April 2012 and thereafter, the artworks and links to the artist’s websites will remain online in the Light Space & Time Archives. Congratulations to our artists who made our “CityScapes” Art Exhibition so successful this month. At any time, we invite our winners and other interested visitors to link their websites to the Gallery’s archive page for further ongoing promotion.

For 26 years, Jon has been the owner and operator of Image One Media in Fort Worth, TX, who specializes in photography, video production, and audio-visual presentations. Jon fell in love with photography at age 9, and has received numerous awards for his images. Jon founded and led the Hope Camera Club for 8 years, and as such has done numerous instructional presentations and training sessions. His photographic experience spans a variety of styles and situations. www.photosbyjon.com

Brut Carniollus lives and creates his art in Slovenia. Brut states about his art, “Despite extensive use of computers and insane amounts of post-processing, photography perceived as an impression of light remains the main source of my artistic creation.” Brut has exhibited his work extensively in both solo and group shows all over Europe. http://brut.bukve.net

Joe is an Australian award winning artist whose colorful and dramatic images have been exhibited in Australia, the United Kingdom, and in the United States. His theatre publicity images have been featured in The Age, The Herald Sun, MCV and Real Time. Joe states that “anything around me can be beautiful. It all depends on how I look at the object. Each day I challenge myself to find beauty and fine detail in the everyday, the innocuous, and in the small things that others may ignore, step over or around, overlook or perhaps take for granted.” http://www.redbubble.com/people/joecalleri

I am a member of the Society of Architectural Illustration (MSAI) and a practicing architect. My current paintings are inspired by cities, particularly my home city of Manchester, UK. I studied architecture at Canterbury College of Art and whilst there I developed skills in communicating architectural ideas through drawings. This now involves representing ‘the city’ through precise pencil drawings overlaid with watercolor washes. www.simoneridyard.co.uk/

Rosie Udovicic, who is professionally known as “Rodeorose”, is a Melbourne, Australia born photographic artist who has an interest in conveying emotional connections with her subjects. Rosie states that “this connection typically involves animals whose survival is under threat, people in candid moments, and with the places that I call home. My works depicting the sea and places on the shore are generally taken right by my homes, either in Melbourne, or way across the seas my second home in Dubrovnik. www.rodeorose.net

Jeff is an Australian landscape photographer who shares his time between the beaches of Sydney, and the Snowy Mountains. He seeks simple and elegant compositions in his work which express his love of the natural world. Jeff states about his art, “My work is from the heart, not grounded in rules of composition, or fine details of technique.” – www.jeff-grant.com

Dave Henderson graduated Boston University in 1976 with a degree in painting. He is a lifelong native of New Jersey, and after more than twenty five years as an illustrator, is now working vigorously in fine art. ”Even as a commercial illustrator I was always a painter and now at this point in my life, to create paintings for their own sake feels like coming home.” www.dfhendersonfineart.com

Harvey is a self-taught artist, he began experimenting with oil painting in his early years producing colorful landscapes. In addition, he studied Architecture at New York Institute of Technology, which also contributed to his artistic values. Harvey prefers creating his art with pastels due to its workability and wonderful array of colors. Harvey states that “when I take trips, I can be anywhere when a scene catches my eye. My camera is always my sidekick. Colors, light, shadow, mood and the time of day or night have so much of an effect on my artwork.” http://harvey-rogosin.comistwebsites.com

DeRitis lives in the Seattle area and has a studio in the Original Rainier Brewery in Georgetown. Keli has been a graphic designer and artist for over 25 years. Keli uses collage, acrylic mediums, paint and found objects to create her mixed media art. She draws her inspiration from exploring numerous European villages. Her website can be found at www.therovinggallery.com

Hon. Mention – Christopher Stevens – “Made in America, Grants Pass, OR”

Chris Stevens is originally from Savannah, GA and now resides in Atlanta, GA with his dog Jasmine. He graduated in 2001 with a B.F.A. in Painting from the Savannah College of Art and Design and is currently working towards his Master’s degree in Painting from SCAD. Chris has always been passionate about the concepts and techniques of photo-realism. This current body of work combines that passion with his love of vintage cars and street scenes. http://cpstevens.com